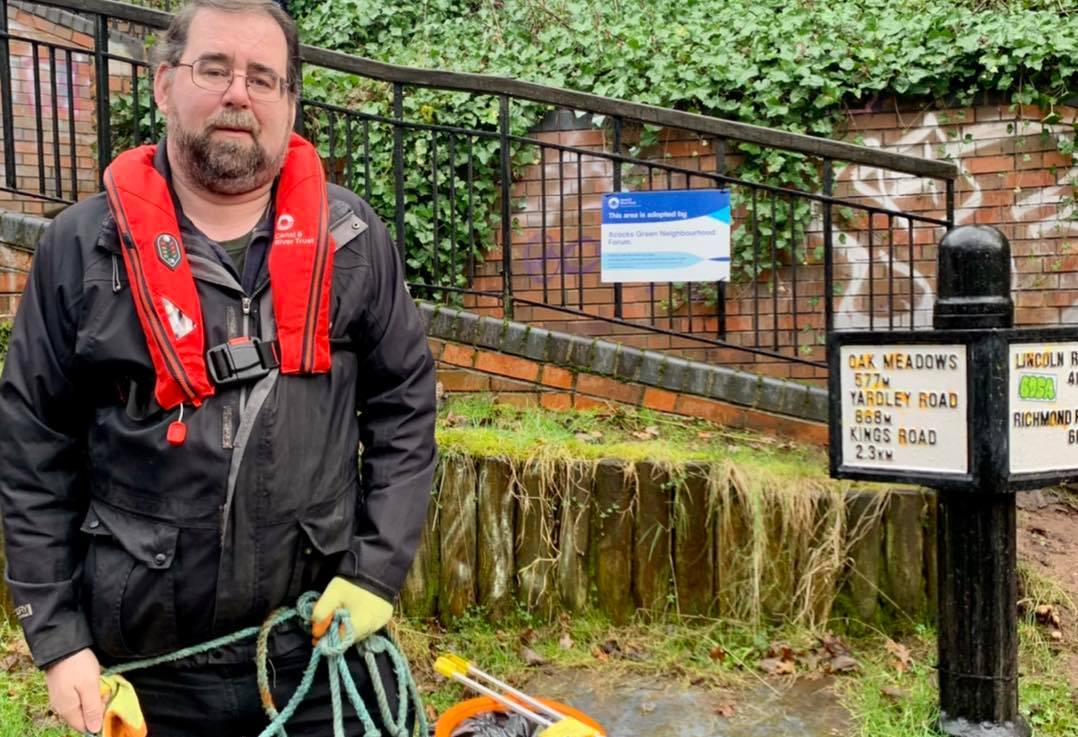 Ninna Makrinov and I joined the local volunteers helping the Canal & Rivers Trust tidying up the stretch of canal that runs through Acocks Green. Ninna got on with some litterpicking while I got busy with the grappling hook. I didn’t catch much until I moved west of the bridge, when the hook dragged out the catch of the day – a Farmfoods shopping trolley. I’m very pleased to announce that Acocks Green Police Station has been taken off the closure list following years of campaigning by myself and the rest of the local Labour team.In 2018 I secured a promise from the Police Constable and Police and Crime Commissioner that they would keep our neighbourhood policing teams local, and now they’ve kept that promise.The police will now be looking at how this station can be modernised to serve our community for many years into the future. I’m delighted to confirm that I have just signed off on an investment of £495,000 in Fox Hollies Park. This will see both play areas refreshed and replaced, with the larger one at the Gospel Lane end moved a bit further up the hill and kitted out with the latest play equipment. There’ll be new play surfaces, fencing, paths and benches and even a bit of extra equipment for the skate park on the other side of the road.

This is part of a rolling scheme of investment using money secured from developers around the area. We’ve done this in close consultation with local residents and we’ve listened to you about priorities. You asked for more secure fencing around the park, so we did that first. Improving the play areas was the next step, so now that the money has become available, we’re getting on with the work.

We should start work in March 2022 and complete during that summer, making this great park even better for all those who live around it and use it.

Reported this excessive growth around the base of several trees on Elmdon Road that were actually blocking safe use of the footway. They’ve been cut back. I’ve reported the same problem on Malvern Road. 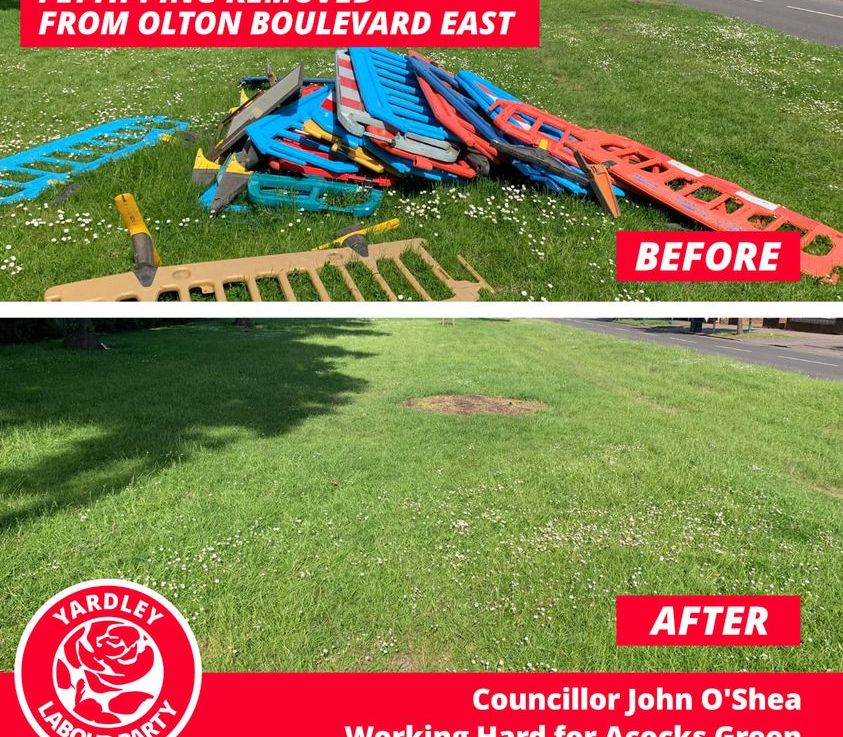 Let me know about any issues in your area at johnoshea@birmingham.gov.uk

We’re cautiously returning to the new normal. Please – take care and get your vaccination when you can.

Please remember that the rules have changed again today. Retail is opening back up again, but please wear a mask and maintain social distancing.

You may have spotted that this hasn’t been finished after stopping in January. Just to update people that this work should restart in the next week or so and will be completed as soon as possible thereafter. 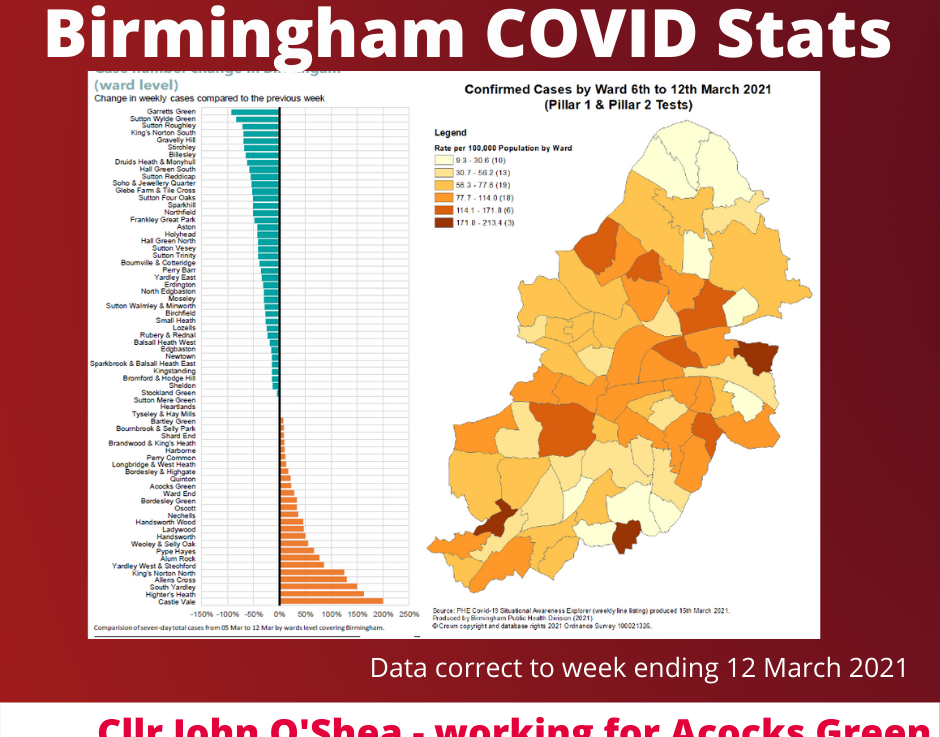 The impact of the national lockdown continues to reduce case numbers. The % of positive tests and the overall rate of cases has also fallen and testing rates have improved. Most of the identified contacts of cases are in the same household or householdvisitors. Spread often happens in the household but it isn’t inevitable, and www.germdefence.org can help.

We also continue to see clusters in workplaces and it is important that all employers take action to protect staff, including regulartesting. Anyone who is unable to work from home, or in a care or support bubble, should be testing every 3 days with lateral flow test which can help identify people who are infectious but don’t have symptoms. Testing for asymptomatic individuals is now available across the city including a facility at the Hippodrome along with fixed sites in Shard End, Sheldon, Kingstanding, Handsworth, Kings Norton, Sutton Mere Green and Maypole.There are 3 mobile sites as well as at over 90 community pharmacies – including the Jhoots pharmacies in Acocks Green and Hall Green.

The average daily Covid admissions has fallen to around 30 new cases a day across the hospitals in the city. Pressure on the NHSremains high, although there are positive signs of case rate improving and this should hopefully fall soon.

28 wards showed an increase in case numbers over the lastweek, but overall the case number has dropped from lastweek from 1,007 to 879 across all wards. Sutton Mere Green reported 2 cases this week, but had no new cases last week,so has been shown as a zero percent increase this week asthere is no denominator.

Case rates take account of the different population sizesacross wards so is a more useful way of looking at differencesbetween areas than just looking at case numbers.

The wards with the highest case rates (cases per 100,000residents) in the last week are:

Case rates are declining in all age groups, and the 20 to 39 age group has the largest number of cases. Similarly, caseshave fallen over the past week in all ethnic groups, with thelargest number being from the White ethnic group.